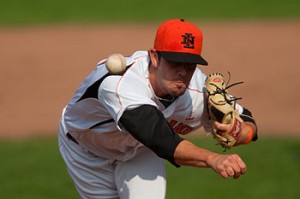 *Played 4 years of college ball on scholarship in the USA from 2001-2005 at Treasure Valley CC, Seminole State College, and Armstrong Atlantic State University.
*2006 played for the Hoboken Pioneers in Belgium going 11-1 with 156 Ks in 96 innings and batting 0.421.
*2007-2011 played for the Door Neptunus in the Dutch Major League, going 28-3 over the 4-year period with an ERA under 1.00.
*In 2010 was named best pitcher in Holland in the Dutch Major League.
*Went to the 2008 Bejing Olympics and receieve the only win for the Dutch with his start against China.
*2009 played in the World Baseball Classic as a closer for the Dutch team.
*Received a Save and a Win against the heavily favored Domincan Republic.
*Following the WBC, Signed with the Toronto Blue Jays on March 18, 2009 and was sent directly to Double-A.
*Leon has played in 3 World Championships, 2 European Championships, 1 Olympics, and 2 WBC.
*Leon is a Gold medalist in the 2011 Baseball World Championships.

*October 2009 – present
*Worked numerous camps and practices in Holland with various Dutch Baseball Organizations.
*Worked with the Langley All-Stars in 2010 and 2011, which won Provincials and the Canadian Championships in 2011.  They led all their tournaments in pitching stats. They are also representing Canada in the Little League World Series in 2011.
*Worked with the Rotterdam Little League organization sending the team representing Europe to the Leatly League World Series in 2011.